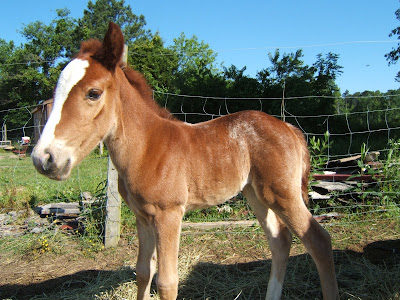 Boys Home of Covington,Virginia has taken a major step to assist in the prevention of the extinction of what might be the oldest and rarest distinct genetic grouping of American horses, the Colonial Spanish Mustangs of Corolla, North Carolina. As recently as the 1920's over five thousand wild horses roamed the Outer Banks of North Carolina. Today only two small herds of these horses remain in the wild, the Shacklefords and the Corollas.

Although they are the state horse of North Carolina, these horses teeter on the brink of extinction. The Corolla Wild Horse Fund has encouraged breeders of Colonial Spanish Horses such as Mill Swamp Indian Horses of Smithfield, Va and the famed, Karma Farms, of Marshal, Texas  to develop a network of breeders to raise Corollas domestically, not as a replacement for the wild herds but as a safety net should those wild herds disappear.

Last spring three foals were born at Mill Swamp Indian Horses as part of this breed conservation effort, two fillies and a colt. The little boy is the son of  Tradewind, a formerly wild Corolla stallion  who was named Horse of the Americas National Pleasure Trail Horse of the Year for 2011. The two fillies are from different fathers which will allow the three to be bred to produce horses for the breed conservation effort for years to come.

Each of the yearlings carry historic names significant to the natives that lived in the area in the fourteenth and fifteenth century when these horses likely first made their way to the Outer Banks. The Black Drink is named for the medicinal purgative that was consumed as part of late winter/early spring rituals. Huskinaw is named for the most important cultural ritual of the people of Tidewater at the time. the Huskinaw was a ritual that spanned nine months in which future leaders were selected among adolescent boys. Pasquinoke was an Indian town not far from the site of the Lost Colony. It was called the "women's town." Perhaps it was a town lead by a Werowancesqua ("Rich Women") instead of a Werowance ("Rich Man") as was more typical.

Boys Home has developed a natural horsemanship program in  using Indian horses of primarily western descent. The program uses horses donated by Mill Swamp Indian Horses and residents and staff of Boys Home have made several lengthy visits to Smithfield  to learn to train and ride wild horses and colts.

With the inclusion of three Corolla's in their program Boys Home will be one of the focal points of the breeding program for years to come.

"I cannot think of a better match. This spring I am breeding two more mares and next fall we will have two more great horses seeking placement with breeders that are willing to work to preserve these super horses", said Steve Edwards of Mill Swamp Indian Horses.
Posted by Steve Edwards

This a remarkable project and one that should be shouted from the rooftops - thank you for your continued efforts
In connecting children to these amazing animals. The horses will teach the children and they will go forth and spread this and like a lighthouse you can continue to guide them:) Bravo!