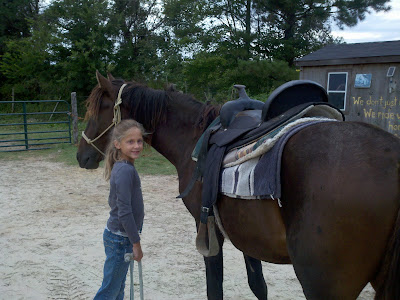 For the first few years that I trained horses my little brother, Lido, was the first person to get on all of the wild horses and colts that we started. He did so though he was only about ten years old, had cerebral palsy and had a right hand and leg that were of nearly no use to him.

Lido, without letting anyone know, slipped an old Appaloosa mare back to the tack shed late one night and bred her to Tradewind, one of my Corolla stallions. Several months later he told Daddy what he had done but Daddy assumed that it was a joke.

The colt was born several months after Lido died. Legacy is a very impressive colt. He will likely be gaited and will definitely be beautiful. That is his owner, Samantha, there with him in the picture above.

Yesterday was a big day for Legacy, Samantha,.....and me. I took Legacy into the old round pen that Lido and I used to use and put him through all of the despooking and calming exercises that we always used. He took everything well. It was the first time that I put any intensive work into the colt, though Samantha's mother has been doing a great job of introducing him to learning.

Yesterday the introductions were completed. I paid back the favor to Lido. I gave Lido's colt his first mounting the same way that way he provided so many of my colts with their first mounting. He did great as I got on and eventually let him take a few steps with me. He will continue to be trained slowly and patiently---the way that we used to do it.

Samantha was not so sure that she wanted to mount up. However, we proceeded--slowly and patiently--and before the sun set Samantha had also sat on her horse. She went home happy. Legacy went back to the pasture contented and I went home with a feeling that I had nearly forgotten--satisfaction.

I discourage them from falling into the trap of believing that any particular clinician has all of the answers and that all other methods are wrong.

That false belief is an insult to Lido, and to Legacy.
Posted by Steve Edwards

Wow. A wonderful story that reminds us how important it is to explore, try, try again, and enjoy the curiosity and support of others.

Samantha and Legacy have grown up a whole lot..She is tall now, tough, confident young horsewoman..she rides him pretty.

Legacy has filled out into a startlingly beautiful colt..I suspect he would give Frederick Remington night sweats. He carries her pretty.

And that, folks, is the sum and total, alpha and omega of the whole shooting match. That is success. -Lloyd