No Predators? Not So Sure Any More 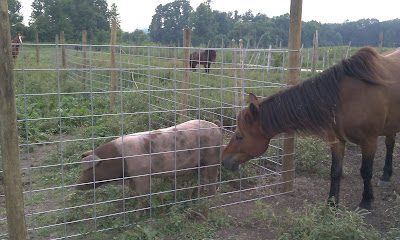 It is often said that a key to explaining the calm disposition of the Banker horses is that they have lived for hundreds of years without the threat of predators.

I question that assumption now. A hog will eat just about anything and loves the smell of blood and the taste of meat. I have seen no evidence that wild hogs attack and kill mobile foals. However, I have no doubt that they would take the importunity to consume a foal as it was being born.

The reaction of the horses to the sight of smell of the hogs was instructive. Most were fearful and curious but some of the formerly wild Corollas and Shacklefords became very agitated and aggressive toward the hogs. These horses, that do not even demonstrate hostility towards dogs, would have killed or at least run off the hogs had they been given the opportunity. The horses that were not from the Outer Banks merely shrunk back from the hogs.

I do not suggest that natal predation of foals by wild hogs has had any significant effect on herd numbers among the wild horses of the Outer Banks, but it may have had an effect on herd behavior.
Posted by Steve Edwards

Very intuitive, Steve! I saw several wild hogs on Currituck and I'll bet the horses know the danger they can pose. The Corollas do show behaviors that my others don't--especially the skill to graze under water. Tommi shows this off by letting King bob for apples. The other horses can't get one, but King captures them easily, having learned to breathe out and exhale slowly to keep water from coming in his nose as he puts his muzzle deep the the tub.