I'm Not Kin To Most of My Family 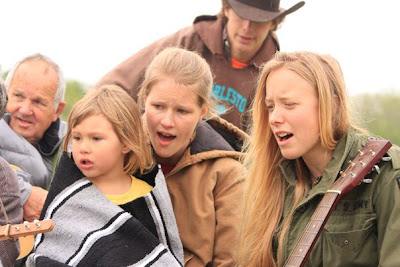 Yesterday was a great day for our program and I think that it could lead to a great day for the Corolla preservation effort. The day was spent in filming and photographing Edward Teach and taking him through a training routine. The Corolla stallion that was removed from the wild following a severe injury is all healed. Even though he had less than a total of ten hours of even having a human inside the round pen with him since his rescue in November, Lydia was on his back within about an hour and a half of beginning the day's session. If the weather stays good we will have him ready to ride in the woods very soon.

I am not going to go into any of the details of yesterday's filming and photography. Partly because the project has just begun and could go in several different directions--partly because I want to drip this thing out as it comes into being--but quite frankly because I am not up to it this morning.

After the day's filming I celebrated very hard. I do not drink at all. However, I do eat. I have not had any ice cream in a long time. Last night was the first time in a long time that I have eaten nearly a gallon of ice cream in one serious eating session and I find myself in the midst of a severe ice cream hangover. My head is about to explode, and Kris Kristopherson's song,"Sunday Morning Sidewalk", keeps pounding through my mind.

But more to the point--I have one natural brother and many adopted brothers and sisters. I also have a family of riders that I have come to depend on. Thursday I found out that Rebecca might be late coming out for the shoot because her son Liam (who calls me Grandaddy Steve) might have to go to the doctor Friday morning. (Liam's little brother's middle name is Patrick, named after Lido.) Emily found out very late Thursday night that she would have to be in class nearly all day Friday. I pretended to take it all in stride. I kept telling myself that even if everything else went wrong, Lydia, Jacob, Jordan, and Emily W. would be around and I would be able to get through the day ok.

Liam did not have to go to the doctor. Emily made it out by midday. And the day went incredibly well.

At the end of the day we roasted oysters and played music. Look close at this picture. Rebecca took it. The end of my three sting banjo is visible and you can see Daddy playing his guitar. Jacob's in the back ground. My granddaughter who is three is wrapped in a horse blanket and is on Lydia's lap. This was the first time the baby had been old enough to sing with us. That is Emily off to the side. We were sitting on bales of straw in pasture number two on a portion of the farm that Momma's family has owned for many generations.

I believe that the song that we were doing when this shot was taken was A.P. Carter's, "Will the Circle Be Unbroken?"
Posted by Steve Edwards

A gallon of the good stuff, eh? Good on ya! It was a beautiful Good Friday. You are blessed to have such a wonderful family, and my family felt very blessed to share it with you and yours. It was a day of soul food.....through and through.

A gallon of the good stuff, eh? Good on ya! It was a beautiful Good Friday. You are blessed to have such a wonderful family, and my family felt very blessed to share it with you and yours. It was a day of soul food.....through and through.