From Lido's Point of View 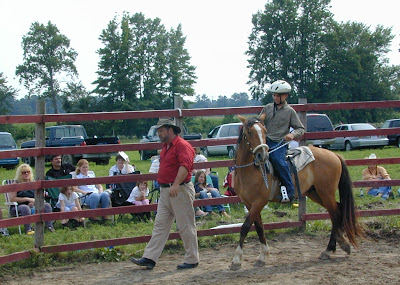 You get on a wild horse that Steve holds tight.
I busted five, in one day, that had never been ridden.
You keep on being tough. You'll get better.
But not as good as me.

You will ride through the woods all round the horse lot.
After a while you will get sore but I will not.
Now my body doesn't tire, my ankle doesn't hurt.
Here in Heaven everybody talks just like me,
Well, actually not quite as good as me.

My youngest brother Lido, who died yesterday at age 17, is shown above riding a mustang in a clinic that we put on. He was about 14 then and had been working Sand Creek for about a week. During the week he taught this barely started colt to come to a stop with his sole cue being to exhale deeply. I will never forget the look of relief on his young owner's face when she came to realize that her young mustang really could be trained. Lido was born with cerebral palsy. He still had it when he died in a hunting accident yesterday, but between the time he was born and when he died he kicked cerebral palsy's ass.
Posted by Steve Edwards

I love to read anything that Steve writes. He has a unique style that is totally engaging. I have read this latest post several times over and each time I have to wait for my tears to stop so that I can see.

I only met Patrick twice - once at a clinic at Wrangler Farms in NC and once at Steve's. Having spent 6years at Penn State working to start riding therapy programs through the 4-H program, I thought I was familiar with the heights that "differently abled" children and adults could reach on horseback but Patrick's abilities and heart far exceeded any that I have ever seen - including my own.

I am 57 years old. Wisdom is supposed to come with age. I will have to live a VERY long time to understand why things happen the way they do. Years ago I read a book entitled "Why Bad Things Happen to Good People." I need to read it again - and again - and again. I have always tried to look for the good in a bad situation. The most appparent thing I can find in this one is the incredible love that Steve and Patrick shared. Patrick and Steve both have a spirit that defies description or definition. It can only be felt. Steve, I hope that you can find some small comfort in the knowledge that both your spirits will always be entwined and that you pass this spirit to everyone you meet whose hearts are open to receive it.

Lido will be severely missed by all of us. When you were done talking to Lido, you always, always had a smile on your face. He just seemed to do that to you. Now he is in heaven, probably looking down on us, thinking how silly we are for being so sad...but, it's hard not to be. He was very special and will be dearly missed by all of us.

What a great way to show Lido's zest for life. Thanks, Steve.

We met once at the horse lot. Lido was on a four wheeler, tearing through the fields with wild abandon, gleefully enjoing the reckless fun he was having.

What an example he left for all of us - to push through our difficulties with a smile and determination. I will remember that most about him.