Authenticity; The Most Difficult Asset To Preserve 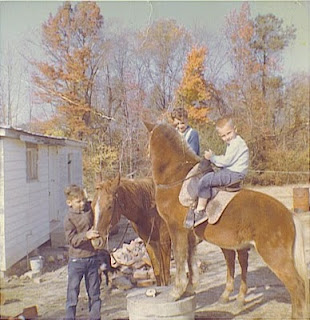 Years ago we had a film crew out for an all day shoot at the horse lot. It was before the TV show, "Wild About Animals" did a feature on our program and the wild horses of Corolla. I loved the spontaneity of the director. He found out what time the sun set and that was about as much planning and scripting went into the shoot. Otherwise, he want to see what it was that made our program different.

We wrapped up a series of shots of unmounted horses and then he decided that he wanted shots of riders in the woods. He told me what he wanted and I told the kids to tack up and be ready to ride out to the swamp. The kids understand that,as always, the unspoken part of any direction that I give is "hurry up." In no time eight or ten horses were saddled and heading out to the swamp. The resulting pictures were among the best ever taken at the horse lot.

A few days later Emily Marble said that the best thing about the day of filming was that when I called for riders to catch horses and tack up everyone simply got their horse, brushed off where the saddle and girth would go, mounted up and headed to the swamp. No one stopped to fix their hair or makeup.

Everyone was there to  ride, not to merely look like riders.

The single most important factor in the success of our program is that we have put all of our emphasis on reality. That is what assures authenticity.

That is a picture of me on my first pony, Tanaka fifty five years ago. That is the well behind the Little House that he is standing on. That is the Little House in the background, the house that my mother was born in, that my family lived in while I was little, and the current home of the big girls who help keep this program together.