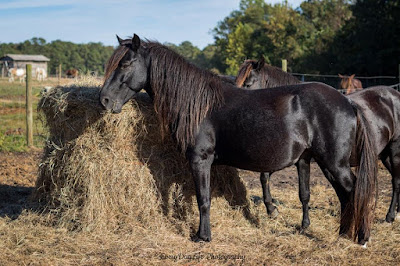 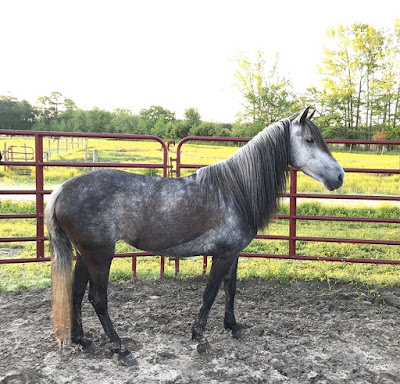 Years ago, I stood on the beach at Corrova and saw my first wild Corolla horses. I was on the inspection tour of the wild herds of Shacklford and Corolla with representatives of the Livestock Breeds Conservancy, and the Horse of The Americas Registry, and the American Indian Horse Registry,  including two of the nations premier Colonial Spanish horse preservationist, Vickie Ives and Tom Norush.

At the time I had never heard of a Grand Canyon horse. It seemed that every time we saw a beautiful stallion, Vickie would same something about how important it would be to cross a Corolla stallion with a Grand Canyon mare.

Look at these pictures above. Manteo, the black stallion is a formerly wild horse from Corolla. Bella Note is 12.5% Grand Canyon. That might not seem like much, but to my knowledge, she is the last surviving mare to have such a high percentage of Grand Canyon lineage. The remainder of her lineage is Book Cliff, Choctaw, Brislawn Foundation, Sulfur, Crow and Shoshoni. (For those unfamiliar with the breed, this does not make her a "cross breed." The breed is Colonial Spanish which is composed of many strains, all going back to the horses brought by the Spanish during the earliest years of the colonization  of North and Central America. Some like to argue that this not correct and that each strain must be considered a breed unto itself. Such people could more productively spend their time counting the number of angels that can dance on the tip of a needle)

We now have a son of Rowdy Yates who is 12.5% Grand Canyon (the father of Bella Note), two mares that are 6.25% Grand Canyon, and two other mares at the horse lot owned by program participants who are 6.25% Grand Canyon. Insuring that this remnant does not perish from the earth is an important additional goal for our program.
Posted by Steve Edwards