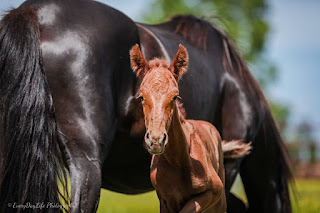 I am afraid that it might. I grew up riding stallions. While I suspect that I owned a mare at some point I do not remember doing so. About twenty years ago we began breeding and producing foals.

Our protocol was simple.  I put the mare that I wanted bred in a pasture with a stallion for a few months during spring and summer.  In less than a year she gave birth in an open pasture with no people around.

I just let her have the foal.

As is my habit, I eventually began studying about prenatal care, conception rates, and live foal birth rates. I was floored when I saw how low the live foal birth rate was in racing and show barn breeding facilities. Mares in those environments were producing live foals way beneath what was occurring in our pastures.

Fifteen years ago it was the rarest of occasions to have a mare bred here that did not produce a healthy, pasture born foal.

Everyone who has any understanding of the mind of the horse knows how strongly they react to human emotions. Their  herd instincts, developed over the ages, cause them to constantly process the actions, and reactions, of other herd members, be those members human or equine.

A terrified person terrifies horses. A person under stress will find a horse that reflects that stress waiting for them in every pasture.

I wonder if being constantly exposed to stressed humans affects a mare's ability to produce a healthy, full sized foal. If it does not, then horses have developed an exception to the entire psychological make up that governs every other aspect of their emotional lives.

I also wonder if being regularly handled by a relaxed, optimistic human who interacts with the mare enhances the chances of a healthy live foal birth.

My strong hunch is that the mare who is allowed to interact with her equine herd without any unnecessary human interaction, particularly during the late stages of pregnancy, would do best.

Such a study would be very difficult to conduct scientifically, but it would certainly be worth conducting.