Wendell's Right Much Younger Than He Used To Be 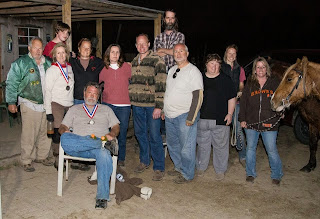 That's him there with the white shirt on with the glasses hanging from his collar. The picture was taken at the end of the 109 mile ride Terry and I did last March. He was there early that day helping out. He was there at the end, helping out. He is instinctively a team player--doing things that need doing without being asked--supporting the kids--and riding.

He started riding with us about ten months ago. He and Comet have become close. They make a good team. Comet's a team player too, people just don't notice it enough with him. Saturday the two of them got tangled up in a swarm of ground bees. They fought the bees together as long as that appeared to be a good strategy. Then they decided to split forces and wage war on the bees on their own. The rider was stung over ten times, not sure how many times Comet was stung.

Yesterday the two of them rejoined forces and Wendell saddled him up and rode on.

When he started riding Wendell was about ten years older than me. At the rate he is going the two of us will be the same age in about six months
Posted by Steve Edwards

I was a little busy with all that going on, Attilla and Medicine Iron evacuated with Attilla riding much like his namesake, then I lost sight of him as Snow decided she had had enough, and then I had the issue of deciding how to deal with it..kicked stirrups and thumped my chest down on the horse's back and rolled free(you can't do that with a sadddle horn)...sent the horse off as I "beelined" (heh) off into the woods sort of away from the other riders..So I really did not get to see Wendell ride it out. It sounded alot like he decided to eject about the same time I did.
Those three horses stopped at a place where Wendell and Comet were literally right on top of the nest, I found that out when I went back looking for them. Considering just how close they were, and how many of the bees must have been on them, Wendell and Comet both held it together pretty good.
Wendell and I tend to ride in the back of the pack on most rides, and I have watched his confidence and skill grow with Comet for several months. He has indeed become a solid and competent rider.

The bees...well, they did not last, after all, they hurt my Best Girl, Snow on Her...I will check again this afternoon, but I am fairly sure we won't have that particular problem again. -Lloyd

Luckily, I only rode into a bees nest once & I was fortunate enough to be in front of another horse. So Chico & I didn't get the brunt of it. These darn ground-dwelling bees!!! Your episode sounds much more fractious!!!!!!
Maggie