I am not sure whether any of my riders met Momma. They often asked me about her and they make a lot of incorrect assumptions. I cannot blame them because Momma was hard to peg.

She and Daddy took over 120 foster kids into our home. She was the first women in our Rescue Squad. She worked hard in disaster relief with the Red Cross. She carried mail and was her own private Department of Social Services for people with problems on her route. She took in stray animals. She and Daddy adopted a dozen children, including one with cerebral palsy. She kept the freezer outside on the porch so people in the community that needed food could just come and get what they needed. She was an officer in the National Foster Parent Association and was President of the Virginia Foster Parent Association. She befriended many people in the community that polite society had no place for. That is but a small portion of how Momma lived her life. A few weeks before she died Governor Warner designated a day in September as Nelson and Aileen Edwards Day.

People who know little snippets like that about Momma often say, "Oh she must have been such a sweet person." Absolutely not! Momma was not sweet. She was tough. The world is filled with kind, sweet people with good hearts and no guts. Unfortunately, those people accomplish very little because they simply are not tough enough.

When I got to the first grade I was shocked to find out that not only could everyone's mother not ride and shoot, Momma was the only one that could handle a good gun and a bad horse. She was not like modern young parents who seem to see their roles as determining what ever it is there children want and quickly getting it for them.

When I complained about food when I was little Momma simply said, "Shut up and eat it. When you get big and go to Vietnam the food will really taste terrible so you just as well get used to it now."

On more than one occasion when people hear that when I was three years old Daddy used to have me cantering around as hard as Tanka could go, they often comment that that must have really upset Momma.

I recall one time that we cantered by the Little House that did upset her. She saw me go by and yelled out of the window to me, "Get your hands off of that saddle horn and stop riding like a damn sissy!"

Momma found the antics of children to be funny but otherwise she was about as close to humorless as one can imagine. The only humorous thing that I ever heard her say was when I was about 10 years old and we were driving by the campus of William and Mary. In 1970 college girls did not feel the need for as much clothes as do college girls today. The sidewalks were filled with barefooted 20 year olds in cut off blue jeans. Daddy was driving.

Momma snapped at him, "Nelson, are you looking where we are going?" When he said that he was she told those of us in the back seat that we had better hold on because it looked like we were about to drive "into one of those poor girl's a---s."

She was rather hot tempered, especially if she felt that any of her kids had been slighted by anyone. Around 1990 several of my little siblings, me and Daddy were playing music at a fairly large event. Unbeknownst to me the sound man did not have the microphone to my Dobro on. Unfortunately it was beknownst to Momma who was sitting in the audience. I doubt if that poor man ever touched a sound system again.

At my first Indian Horse Festival a well dressed young women turned to the lady beside her and said that she was going to have a facility like mine but that it certainly would be more "upscale". There were nearly 1000 people there and the poor girl selected Momma as the stranger with whom she would share her future plans and her assessment of my horse lot. That was, as they say, a bad move.

But none of those stories really explain Momma. This one does. Momma's social circle was composed to a large extent of other foster parents. One of her friends had an entire family of foster children that she planned to adopt. She called Momma and told her that she had found out that she had cancer and asked Momma to adopt the family. She did not want the kids broken up and sent to different homes.

Momma readily agreed. She did not tell her friend that she also had cancer. And that was the essence of Momma. She understood something that too few others have. Theologians are like Dressage teachers. Both take something simple and beautiful and complicate by a bunch of rules and artificial standards.

Momma lived her life as do only those who truly understand what has been called the Golden Rule. One can only love one's neighbor as one loves oneself if one puts away all self interest. Momma was the least self protective, self interested person that I have ever known. Momma knew that she was dieing for a long time. Though she never did so at home, she was in a wheel chair a national foster care meetings. My home was more comfortable for the special bed and other devices that she needed at the end so she lived, and died in my home. She died with Me and Beth, and Daddy and Shelly in the home. As would have been expected she died in her sleep so their was no death bed vigil. (She would have considered such things ridiculous.)

Beth and I own the Little house where Momma was born and we own our house where she died.

She had the biggest funeral in the church up to that day. It was a very integrated crowd. In 1966 it seemed to me that Momma must be the only white women in the world in favor of integrating schools. She did not mind being out of step with the other white people in our area.

In fact, she decided to stick her thumb in convention's eye one more time, even after death. Momma's body was handled by her friends at a black funeral home. Don't believe that that had ever happened at that little church.

No, Momma was not sweet. She was not soft hearted. Momma was tough. I am very proud of that.

So for all of my little riders that know Daddy so well, that is what Momma was like.

(Daddy's cousin pointed out to me last week that the older I get the more I look like Momma. This picture looks a lot like Momma) 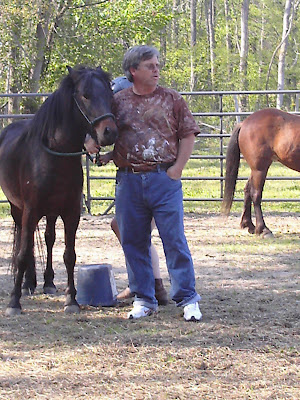