Two From The Original Red Feather 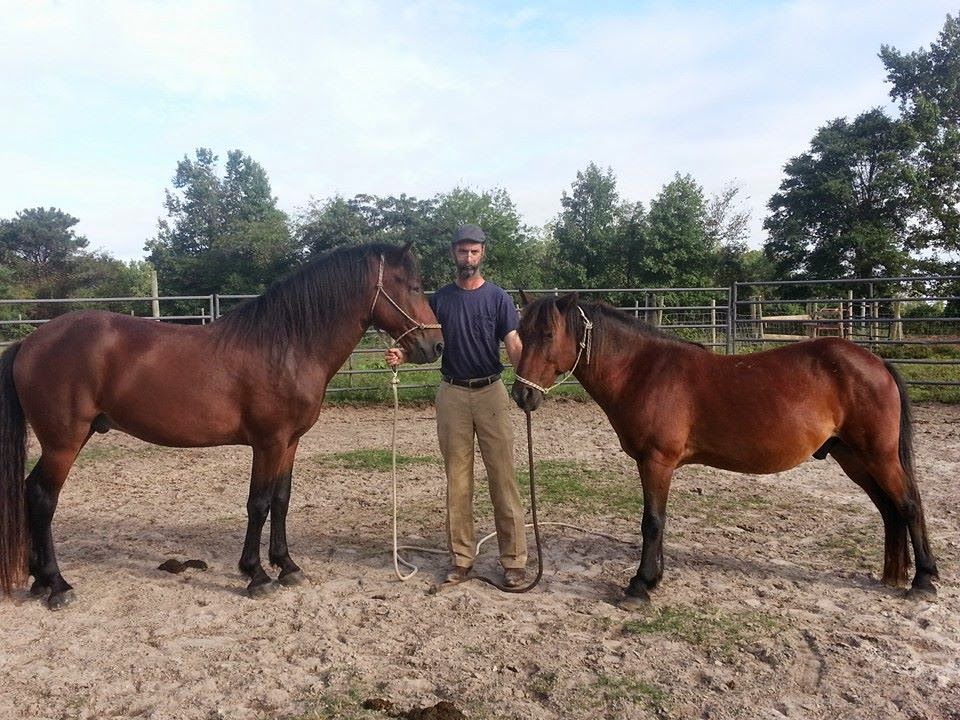 The big stallion, Stitch, is a pure Corolla born and bred domestically to a mother who was also born domestically. The smaller horse is my Red Feather, the most athletic horse with whom I have ever shared a round pen, who was born and bred wild and lived wild until adulthood. They are half brothers.

Diet is part of the difference, but only part. My Red Feather produced a filly who grew up to be at least as tall, and maybe taller, than Stitch.

Stitch is highly impressive and he also just happens to be big. I hope to raise many foals off of him because he is highly impressive and not a single one because he is big. Dr. Sponenberg has pointed out that selecting Spanish mustangs for breeding based on size produces large horses who do not carry as much Colonial Spanish type in their bodies.

We cannot risk loosing everything that is special in these horses simply to make them more acceptable in the eyes of modern horse people.

Bonnie Gruenberg's great book, "The Wild Horse Enigma" (which I was asked to proof) will go to the publisher soon. It will be the primary text on the wild horses of the east coast for the next fifty years. She has found several references in old writings to there being two types of Banker horses in the 1800's. (The Corollas make up one of only two remaining wild herds of the Colonial Spanish horse of the Outer Banks of North Carolina known as "Bankers.") Those references, whether correct or not, refer to the separate types as "Seminole Ponies" and "Chickasaw Ponies".

The Chicasaws were described as larger and easier to handle and the Seminoles were smaller, rough ponies. The explanation being that the poor whites who lived on the Outer Banks traded in the "Chickasaws" (likely of the same root stock of the Cherokee and Choctaw strains) prior to the ethnic cleansing that forced those tribes across the Mississippi. I cannot find a historical hypothesis that makes sense that would have brought a new influx of Florida ponies to the Outer Banks and I strongly suspect that the labeling of these type as "Seminoles" resulted from them simply looking identical to the horses of the Seminoles. Those horses would have been familiar to men of the Outer Banks who fought in the Seminole war.

I am not aware of any genetic proof of  the two source theory. However, my pasture contains Swimmer, a Corolla mare whose type is indistinguishable from a Choctaw horse and many of the smaller Corollas like my Red Feather.  The theory makes sense. It is based on historical anecdotal information it cannot be ignored simply because years of watching CSI on tv has caused us to believe that there is no truth outside of a laboratory analysis.

In either event, the Chickasaw ponies and the Seminole ponies were both Spanish horses. Interestingly enough, on Shackleford Island where the only other herd of wild Banker horses live I have seen absolutely no evidence of a separate, taller Choctaw type, but there is evidence of a heavier, less refined influence

In fact, it is the modern rider who deserves the chance to ride one of these super horses. That will never happen if we allow them to go extinct.
Posted by Steve Edwards

I have lived in NYS all my life, and when I was a kid, there were many small, single footing horses that turned up at the barn(owner bought & sold horses) where I boarded my horse (this was about 60 years ago). They were no special breed or type-just nice smooth-gaited little horses and we rode them all over - no shows - just going riding. Have to say it was a great time!
Maggie

I have been wanting to get this picture taken for awhile..Stitch has become manageable enough to get this one. I want to get one with overlapping profile, but the big horse won't stand for that yet. Red Feather...does not care.
I am very privileged to be a part of both of these horse's lives..they are both extremely athletic (Red feather once jumped a six foot ditch carrying me..standing jump..strong boy.)
The personalities of these two are very similar, both of them are hyper anxious, although Stitch has never been as violently oppositional as Red Feather was..I am just as glad..he is a handful when he blows up.
Stitch is a joy to work with, he rarely has to be shown any given thing more than a couple of times and he figures it out. He is very gentle, tries to be, even when I have scared him in some way.
Yesterday was probably the most difficult workday he has had in his life, I worked with him for three or four hours, not constantly loading him up, but work and soak, switching between tasks and returning to those he needs help with. He accepted a saddle pretty well at the end, although he lost it when I went to lace the cinch up..ah well..he will get it in a few days. Same deal with the hackamore..he will get it soon..he is quite ear shy at this point, but is getting better. Scratching hard up at the base of his mane will curl that big old muscular neck and head into me, and his eyes will close...he just quivers at it. 800 lbs of cuddly, it turns out.
When he came to us he was a little overweight, and would literally blow sweat off him at the slightest exertion, he is now leaning out and developing atonishing muscle tone, and when he runs or trots in the pasture it is with smooth grace. I suspect he is going to be quite the saddle horse. -Lloyd

Maggie,
I wonder if those small saddle horses you speak of could have been, or related to, the Sable Island horses? -Lloyd

Lloyd - Sorry - I guess I never went back & looked at the comments here after I posted mine. I have no idea where those horses came from - the one little mare that sticks in my mind was kind of lanky-bigger head - looked like the Trottingbred ponies that my blacksmith & his wife had - part standardbred and part Shetland- some looked like miniature standardbreds & FAST! The ones they had were stockier & little smaller than this mare - but she was soo smooth. And really nice disposition. Probably had been bought & sold & auctioned off many times. Which is shameful because what a nice ride & calm manner. I saw & rode many such nice horses and some who had obviously been misused & sent "down the road". Made that way by humans!
Maggie