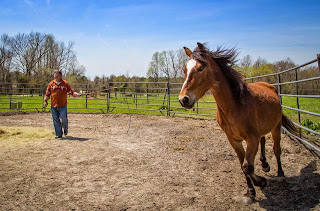 I have never felt a need to tell others what they must believe. I simply try to live the way that I understand God wants me to live. How one lives is the most important sermon one will ever preach.

In fact, it is the only one that matters.

Several years ago I came to realize how similar theologians are to dressage instructors. Both take something pure and simple and turn it into complex set of twisted rules. Neither leads one to become a better person but each convinces their adherents that they are so very superior to those who do not seek their knowledge and follow their rules.

I was very excited when wrist band theology began to take hold among young people. That little piece of rubber asks what to me is the central question of Christian life--"What would Jesus do?" In fact, it has become the only theological question that I ask myself.

We have sufficient evidence of Jesus most important sermon, how he lived his life, to be able to answer those questions. But from the beginning of Church history theologians have failed to do so. It seems that Jesus was just too simple, his rules not numerous or stringent enough, his lack of zeal to punish those not adhering to doctrine and his total lack of interest in building up a sufficient store of wealth in his church seems to have left so many with a need to tidy up the mess Jesus made with his preaching and fill in all the blanks that Jesus left open.

It seems that they thought Jesus was likely doing his best but just needed their help to set the record straight. So new belief systems were built pulling a bit here from Greek and Roman religion and philosophy and a bit there to placate political and religious powers of the time.

In fact, all that one needed to do to advance such beliefs was to ignore or explain away what Jesus did in his life. The Church became very good at doing that. Its leaders took obscure passages from other texts to define Christianity. The life of the man who preached love and compassion had to be glossed over by those who sought to amass wealth and power.

Beside my home is a small country church and a cemetery. The tombstones may have a word or two on them, perhaps a line of scripture or an inspiring word of poetry, but they all have one thing in common--a date of birth and a date of death. And that is exactly what too many theologians and religious leaders have done with the life of Jesus.

A Christian is taught about Jesus birth and his death, just like what is on the tombstones, but all that stuff about caring for the poor, being selfless, exhibiting perfect generosity, refusing to judge others, refraining from violence, and identifying the poor and the powerless as God's people had to be ignored or explained away.

There simply is no money to be made off of those teachings.

I cannot imagine that Jesus would be able to sit comfortably in the pews of many modern churches. I expect that his eyes would dart around the sanctuary, looking for tables to overturn.

I have been given the gift of horses that wipe tears from the faces of little ones, bring smiles to the faces of older ones and bring peace to the minds of all of us who suffer in our own way. I believe that Jesus would enjoy himself in our horse lot--plenty of kids that that he could suffer to come unto Him.

Long story short, one of my daughters turned her car around yesterday to return to the lot she just left..she stopped and gave a young homeless man a bottle of water and a five spot..

And was approached and scolded by a fellow handing out church pamphlets..saying the young man should get a job...

My daughter was understandably offended at this, and expressed herself with the typical George lack of diplomacy. I am a bit proud of that.

I know we cannot be perfect, or even particularly good sometimes,
but I will settle for "better than yesterday."

The more I study horses, and the more experience I gain in working with them, the clearer the picture of just how great good, solid natural horsemanship is for both human and horse souls. They really are healers.

I sort of enjoy the image of Jesus looking for a table to flip...turning the other cheek, while admirable, is not always the only answer. -Lloyd