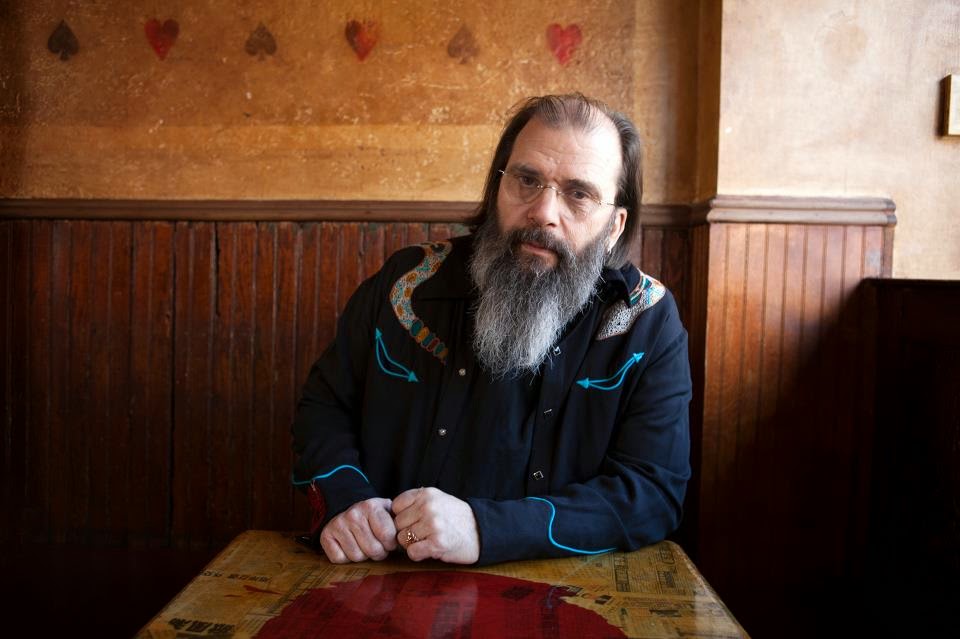 Years go I wrote something decrying the pathetic state of American lyrical composition. Diane W., who I knew to have a clear analytical mind, sent me note that perhaps there were great lyrics being written but that I would need to hunt out those writers.

Had the suggestion come from anywhere else I would have dismissed it out of hand. But A.P. Carter was not re-discovered by America until about three years after his death. Maybe there were other great ones out there now.

So the search began. I found Gram Parsons, Guy Clarke, Towns Van Zandt...and I found Steve Earle. I think that he is America's greatest living song writer. Others point to Bob Dylan but I prefer quality over quantity.

I find Steve Earle to be even more compelling than his mentor Townes Van Zandt.

And Thursday night he was in Virginia Beach and I was in the audience. And after the show I talked to him. I told him about my little riders that are learning to play music. I told him that I teach them Carter Family, Woody Guthrie and Steve Earle songs. He was amused when I told him about the audience's reaction when innocent looking, sweet looking little Jessie sang about Burning the Walmart Down. I told him that Ashley said to let him know that she thought his version of Taney Town was much better than mine. He said that he was sure that my version sounded just fine.

To my surprise I was unusually comfortable talking to him. No elevated pulse, shortness of breath, just like sitting around the tack shed talking for a moment or two. (Unlike when I first entered the Carter Family museum and spoke with A.p. and Sara's daughter Jeanette.)

Still this was one of high points of my life.

And it would not have occurred but for Diane W. taking a moment to send me a note several years ago.

(This photo is from a Huffington Post story.)
Posted by Steve Edwards

Hey pretty baby are you ready for me
It's your good rockin' daddy down from Tennessee
I'm just out of Austin bound for San Antone
With the radio blastin' and the bird dog on
There's a speed trap up ahead in Selma Town
But no local yokel gonna shut me down
'Cause me and my boys got this rig unwound
And we've come a thousand miles from a Guitar Town...

It is hard to argue with that...The best music in the world tells a story...Songs like this one, Copperhead Road, pretty much anthing ever done by Johnny Cash, the Carters, Chris Ledoux, Marty Robbins, Dave Stamey, and Don Edwards.. (Look those last two up on Youtube..you will not regret it.)The list goes on.
I cannot say that the worst music in the world does not tell a story, as I do not consider it to be music...organized (or not) noise is about all.
And don't get down on me about classical music..it all has a story, even with out words. Tchaicovsky would likey agree with that..

This old world needs more music with a story...can we wake up Johnny Horton and Roger Miller now? -Lloyd
Trailer for sale or rent...-Lloyd

This was a nice birthday present, even if I did not see it until now.
I am glad something I said proved useful.