I Am Not To Old To Appreciate Beauty, Just Too Old To SurrenderTo It

Holland was born wild on Shackleford Island. His head is big, coarse and crude. He does not have Manteo's look of nobility. I strongly suspect that that his mother and most of the other members of his herd called him "Bubba". Even a quick glance at his eye makes it obvious that he is not contemplating deep philosophical issues and is more likely trying to remember where he left his RC Cola and his Moon Pie.

And with all of that do you still think that I should care that he does not look 'refined'? 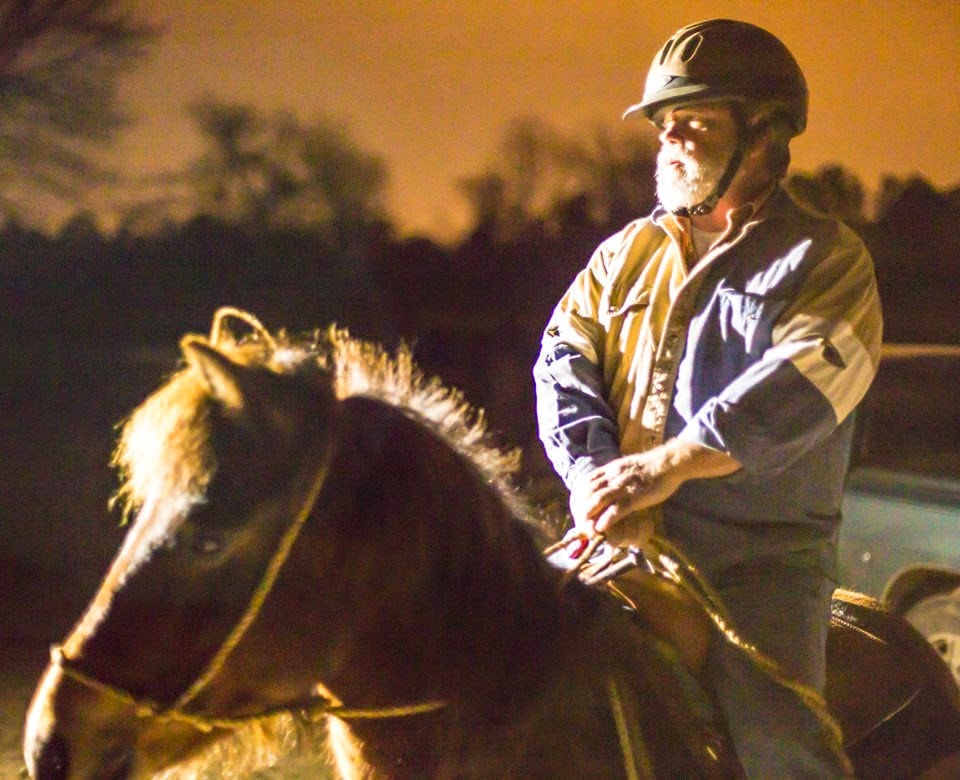 (Holland getting ready at 3:00 am for the first leg of our 109 Mile Ride on March 23.)
Posted by Steve Edwards

One of these comments back a year or so ago, I wrote something about my mental picture of the "Ideal Horse."
Thoroughbreds...fast, agile and aggressive..
Quarter horses..sprinters built like a tank..
Arabs..fast and intelligent..
I can go on like this all day..
Mustangs do a little of all of it..Snow on Her's Sire is a Dressage horse...good one too.

Nothing has really changed my mind about what makes an all around ideal horse..suited for most jobs..Holland still jumps into my mind when the subject comes up.

Might explain why I like Stitch so much with his big, round fenders and big old mule head. The concept of beauty is a slippery one, and on which deceives many people.

Being that the weather had me pinned down last night, I picked up my copy of Seabiscuit to read myself to sleep..Seabiscuit was bulldawg ugly in the eyes of many people..in the Thoroughbred world he was literally the ugly son of very fast, very, very violently intractable horses..it was either his sire or grandsire who stomped a groom to death in a fit of rage..
knock, kneed bowlegged, sawed off runty critter..
One who captured the imaginatons of an entire generation...his last race he drew a crowd of some 78 thousand spectators, about the same as today's Superbowl.
Tom Smith was Seabiscuit's trainer..a man who had little use for what other people thought about what makes a horse tick, and probably one of the best horsemen the modern world has known. Smith knew one thing, and he knew it well.."Listen to the Horse."

Holland does not say it very loud..but he carries a big stick.

Holland goes, because he has a lot of go. But he goes with you, Steve, because he loves you. So it's not really abt how beautiful he is to you, but how beautiful you are to him. Because he loves you. Because Snow has made him a little afraid of standing water. And I made him a little afraid of being in the woods without you. But with you, he is endlessly secure. Holland is beautiful to me because I love him. It doesn't matter that his red coat draws more of those vicious huge flies we both hate and fear. It doesn't matter that his long mane has a single cult that tangles, much like mine in that one recalcitrant place. It doesn't matter what anyone else sees when I look at him. I see what *I see.* I see his strength. I see his power. I see his endless go. I see his solidity, his largeness, his soft fur, his wiry mane. I feel the wind in my face, the barely controlled fear in my belly as we dash headlong on the sand path, one thing: me and him. I see the head games he plays with me, because I am "just his mare" rather than him being my faithful horse (as he is yours). I see him walk away when he knows I can't catch him, hesitate to come to me like a pre - teen boy with his crush until Comet goes first, and wait at the fence, and then get angry and disappointed and "punish" me when I have been gone too much. Holland , I tell people, "fits neatly under my arm." Like he belongs there. Because he does. I see him through love. Love both clouds and clarifies. Beautiful!

No discussion of beautiful horses is complete without a mention of the elegant and refined Wanchese, so I am mentioning him. :>)