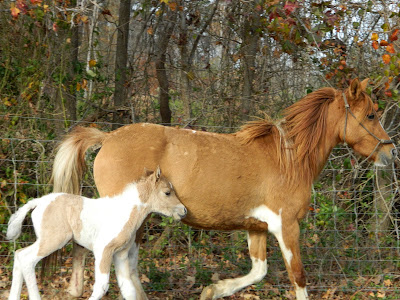 Quien Es? is one of the mares that we produced by crossing, Wind in His Hair, a Chincoteague stallion, with several BLM mares. The result has been a series of horses with shocking endurance and unforgettable beauty. Terry recently began competing Quien Es? in competitive trail rides. Always the smallest horse in the events, she leaves the owners of 16 hand horses wondering why their horses cannot perform as bravely as does the little American Indian horse.

On November 20 she gave birth to Peter Maxwell shown above. Though only 1/4 Chincoteague he took 100% of his color from the island at the Virginia/Maryland border.

His father is Edward Teach, a black Corolla stallion. If past experience bears out, he will have the endurance of a marathon runner and the disposition of Grand Pa Walton.

What a lovely photo and beautiful blog entry.

This foal is even more stunning in person.

But, agreed, after Labor Day he should have had the social graces to put a little black in his spots.