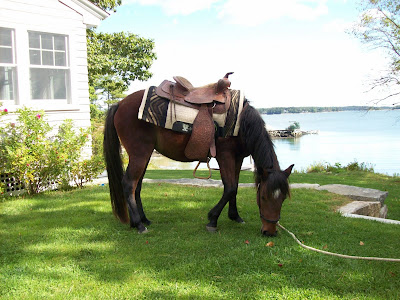 Too much time is spent among Spanish mustang preservationist arguing about...,actually every moment spent arguing is time wasted. And with so many strains teetering on the brink of extinction there is no time to waste. Among the worst wastes of time are the efforts to define a particular type of Colonial Spanish conformation as being the only type of true Spanish conformation, with a suggestion that everything that deviates from this Platonic "form" is the result non-Spanish bloodlines. We can all have our preferences of the variations within strains without trying to claim that our individual preference is the only pure strain.

In the report of the inspection tour of the Corollas and Shacklefords (which can be found on the Horse of the America web site) Vickie Ives does a great job of showing the variations of Spanish types that appear even in a genetic grouping as isolated and defined those of Corolla and Shackleford. I find some of these variations more attractive than others, but to say that any variation is proof of purity and any deviation from that variation is proof of foreign blood would be absurd. The DNA of these horses makes it very clear that they have been isolated from outside influence for a very long time.

Every mustang preservationist should love their particular strain. It is fine to even pretend that that strain is a separate breed. It is very poor strategy to attack those who promote other strains. It is even poorer strategy for those who are attacked to respond. Such exchanges simply provide ammunition for those who wish ill toward all of our strains.

Efforts to preserve these horses are already shackled by the existence of multiple registries for Spanish mustangs. The HOA promotes all of the strains without trying to stain the image of any recognized strain. That is a model that all preservationist should follow.

I recently contacted a breed organization that strongly promotes 1/2 breed crosses of their breed. (I am very impressed with the 1/2 Corolla horses that we have produced by breeding to several modern mares. These 1/2 breeds will not be used in the off site breeding program. The purpose is to produce super horses that will get the Corolla name and bloodlines in front of a broad audience. Werowance is already doing that in South Carolina). I explained a great deal about the Corollas with particular emphasis on their calm natures and freakish endurance. I made it very clear that we are offering the breeding services of each of my Corolla stallions at no charge to mares from this organization. I made it very clear that there were no strings attached. I wrote twice with the offer.

That organization did not deem the correspondence worthy of a response, either time. That is what we are up against, an established horse world that sneers at our horses. Every time we refuse to work together, every time we claim that our strain is the purest, and every time that we try to "breed up" our horses by making them taller we give aid and comfort to that established horse world.

We sink, or we float, together.
Posted by Steve Edwards