The Measure of A Man 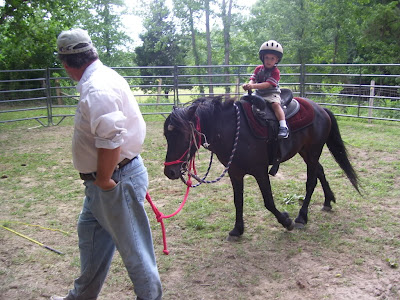 I do not mind most of the things about aging that seems to bother other people. I do not care if my hair is brown or gray. It does not bother me that I have only a few more teeth than the average duck. It does not bother me that I cannot run as fast as I once could. Now I simply leave sooner and that works just as well as having run fast to get where ever I am going.

It does bother me that I set goals that I have yet to achieve. I have now, on three occasions set out to ride 100 miles in a day. Each time I got in over 50 miles, but my best day was only 69 miles. About four years ago I was picking up a sick colt (he later recovered fine) when my right bicep tore in two. It was a nasty looking affair but the pain was not that serious. In fact, we went ahead with the ride that was scheduled that afternoon. It never hurt badly but it did not heal correctly and is only about 40% as strong as my other arm. I have even gotten used to that.

But tonight the ravages of time hit hard. I had a sink full of live oysters and an empty house with no distractions. I put three large containers, all filled with oysters, in the oven. I planned to knock off the first 130 some oysters while I was cooking some more. I was looking at a three hundred oyster night.

Before I ate my hundredth roast oyster I began to feel full. My kitchen sink is full of oysters. There is nothing holding me back, but I simply am full. There has not been a time since I was a kid that I could not eat even a hundred roast oysters.

Forget the Mayan calendar and the 2012 apocalypse. This is much bigger. If I cannot easily consume even 100 roast oysters, that must surely be a sign of terrible things to come.

This is a picture of my grandson on Wanchese, a Shackleford stallion. If you ever happen to bump into him, please don't tell him that his Granddaddy could not even throw down 100 roast oysters. He is a sensitive child and might not be able to bear the shame.
Posted by Steve Edwards