The Blood of Good Blooded Horses 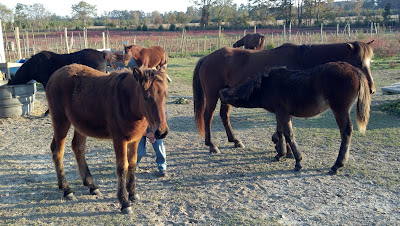 A bit of perspective is needed when looking at the current horses market. I must admit that I was caught off guard a bit when it was suggested that because of the "glut" of horses available today it was wrong to try to stave off the extinction of the Corollas. That may have been the single best example of gnat straining/camel swallowing "logic" that I have encountered.

The off site breeding program contributed to America's "surplus" of horses by producing four foals. (That is four, not four thousand.)

The worst thing about these statistics is the horrible truth that lies behind them. We do not have a surplus of horses. We have a shortage of new riders. The industry should focus on increasing demand. Supply has obviously been cut to the bone.

It can be done, but not by using the model of the established horse world. We can make the cost of horse ownership plummet while increasing the health and happiness of our horses by encouraging natural horse care. Natural horsemanship makes it possible for dedicated novices to train their own horses.

Here are some facts that are not discussed when considering horse ownership. The cost of properly feeding a Colonial Spanish horse for a day is only a bit more than the cost of feeding high quality dog food to a German Shepard for a day. My average vet bill for my horses is less than the average vet bill for our four terriers. (Granted I spend much more on dewormers for the horses than for the dogs.) A great used saddle can be picked up at the local auction for $125.00. The price to shoe a properly shod horse is $0.00. (A properly shod horse wears no shoes). Proper hoof trimming is easily learned and most owners over the age of 12 can learn to do a first rate job of hoof care. A year of horse ownership can cost less than a year of membership in a select league soccer team.

The irony is that the things that make horse care so expensive are the things that hurt horses the most. A life of sugar, stables,and shoes costs a fortune. A healthy lifestyle for a horse costs a fraction of that amount.

Instead of promoting enlightened horse care and working to reduce the cost of ownership, too many breeders and breed associations all fall in line to support big agribusiness' solution to the "glut"--horse slaughter. Instead of working to give a kid a life with meaning through horses they prefer to take the life of a horse.

There is something deeply wrong with an industry that produces pedigrees to show how good blooded their horses are, while, at the same time, advocating spilling that good blood on the slaughter house floor.
Posted by Steve Edwards

Absolutely, Steve--and a tip of the Karma Stetson to DianneW, too.