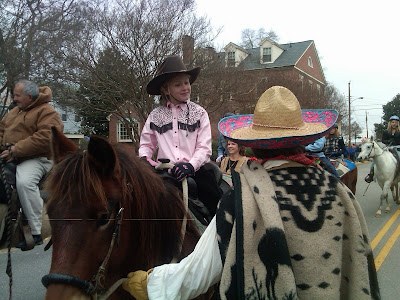 When I sing to wild horses in the earliest part of their training one can see them begin to relax. I am not convinced that it is the music that has any direct bearing on the horse. I think that it is more likely that singing reduces the stress signals that I send out. In short the effect is on me but the results show up on the horse.

Rhythmic repetition has a powerful impact on the human mind. It is at the core of the concept of mantra use in meditation. It is the reason that knitting brings peace to so many people. I do not remotely understand the whys and wherefores but the reality of it cannot be denied.

Last night I slept better than I have in many months. Yesterday afternoon I went upstairs to the music room in the Little House, picked up my guitar, tuned it down four entire frets and played two songs. I was alone. I repeated the two songs until I had them like I wanted them. I did not have a watch and there is no clock in the music room. When I got home I realized that I had been playing those two songs for nearly three hours.

Music's impact seems to vary with individuals. Lydia and Emily caused me to have an insight about the role of playing music that, though I have been playing for forty years, had never occurred to me.

As we are preparing to start up the music program with a new round of little riders Emily told me that it was very important to teach the kids some "happy" songs. She further said that most of the ancient songs that I enjoyed made her felel bad when she sang them. The only thing that floored me more than that was the fact that Lydia strongly agreed.

The girls caused me to realize that every song that I have ever considered to have meaning were songs of tragedy. Love songs that I enjoy focus on couples together for many decades only to be separated by death (e.g. "Gathering Shells By the Seashore") The other type of love song that has meaning are those that involve being driven to suicide by the abandonment of a lover (e.g."I Never Will Marry", "Dear Companion")
For songs of history I find myself drawn to "The Titanic" and "The Cyclone of Rye Cove" (a great song of A.P. Carter's about the tornado that destroyed a public school and killed a dozen people.) For old time gospel songs I like those that seek to give meaning to suffering like "Farther Along" and "Will the Circle Be Unbroken?"

It had never occurred to me before they raised the point, but I cannot think of a single frivolous song that I enjoy. Some I just dislike more than others.

But that was not the biggest surprise for me. I was stunned to hear that performing sad songs made the girls feel bad. I feel so much better after playing or listening to songs with meaning, songs about real suffering. I thought that everyone did.

My feeling is not based on some rational, moral of the story, see things could be worse, etc, kind of reasoning. The feeling is not based on any reasoning rational or irrational. It simply is. Just as getting under a blanket makes one feel warm and standing barefoot in the snow makes one feel cold, listening over and over to "In My Hour of Darkness" makes me feel peaceful.

So, I will teach the little ones some happy songs but I will not change the ones that I listen to or play by myself. I have a handful of things that give me feelings of peace and I am not going to throw any of them away just because it does not work that way for other people.
Posted by Steve Edwards

May I recommend my favorite happy love song, And I Love You So by Don McLean?

“The book of life is brief
And once a page is read,
All but love is dead,
That is my belief.”

The round he does, (By the Waters of) Babylon, while not happy, is very beautiful, IMO.