The Off Site Breeding Program 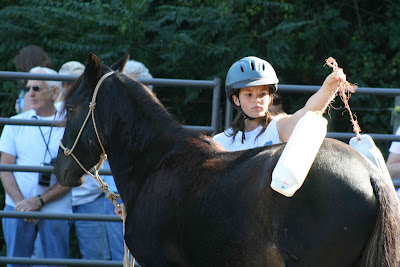 Facts matter. Truth is not a matter of perception and reality is not an opinion. Here are the facts on the off site breeding program:

The program is not a replacement for having a wild herd at Corolla. Its fundamental purpose is to provide a safety net to prevent the extinction of what might be the oldest and rarest distinct genetic strain of American horses still in existence. If the opponents of the horses succeed in erasing them from the wild we hope to have enough horses domestically raised to keep them from going the way of the Narragansett Pacer and the American Hobby.

The program's ancillary purpose is to create additional supporters of the wild herd by demonstrating their amazing athleticism, beauty, and temperament. This is done by exposing them to the public in a variety of venues, from clinics, demonstrations, parades, special events and publications.

The initial breeding stock comes from horses that had to be removed from the wild at Corolla. Other stock comes from the herd at Shackleford. The reblending of the Shackleford Bankers with the Corolla Bankers does not result in a "mixed breed" horse. They are the same breed but have lived on different islands on the Outer Banks for a few hundred years.

All foals produced will be registered with the Horse of the Americas Registry, the nation's premier registry of Colonial Spanish horses. Stallions in the program do not simply run with a band of mares. Breeding is controlled in order to build on the limited genetic diversity that exists. For example, Pasquenoke, a foal of Secotan (Corolla) and Wanchese (Shackleford) will, when mature and completely trained to saddle, will be bred to Manteo,(Corolla). A resulting colt will eventually be bred to Persa (Shackleford). The succeeding generation could be bred to Mokete (Corolla).

Of course, this will require the continued careful selection and breeding that we have used thus far. I will need to acquire additional Shacklefords for future generations of breeding.

We will likely be leasing an additional fifty acres of pasture to house the breeding program. Of course, the horses will continue to be trained with natural horsemanship, given natural hoof care, and allowed to live under conditions of natural horse care. Those who acquire horses from the breeding program will be strongly encouraged to do the same. It would be a shame for the horses that have been given the opportunity to live healthy and happy lives to end up in the hands of someone that would put them in a stable, feed them sugary feeds, and put shoes on their hooves.

This is a long term and slow growing effort. We could simply release stallions in with various bands of mares and let them reproduce on their own. To do so would merely create a pasture full of horses with even less genetic diversity than exists at present. That would do nothing but produce a domesticated herd that is on the road to genetic collapse at an even faster rate than the wild herd. We also want to make sure that the resulting foals are placed with owners that will continue their training and their use, both for the happiness of the individual horse and to create more awareness of the Banker strain.

The best hope that the program has is that one of the major participants in this effort is Karma Farms of Marshall,Texas. Having Vickie Ives on the side of these horses is a tremendous boost. Their Corolla stallion, Sea King, is making waves among trail riders and American Indian Horse competitors in that drought stricken region. When it ever starts to rain again in Texas I expect that we will be hearing a lot more from their Corollas.

We will continue to emphasize that while these little horses make great mounts for kids, their size does not prevent them from carrying adults. Bankers have been carrying adult riders for hundreds of years. The Conquistadors were not elementary school students. We will continue to build statistics to demonstrate the horses' ability. (e.g. 13 hand horse, 222 pound rider, fifty miles in 10 hours and 21 minutes, 12.2 horse, 215 pound rider ridden on trials primarily trotting and gaiting for 206 hours in 11.5 months).

Many decisions and much planning will have to go into the program in order for it to be a continued success. It will require an extensive knowledge of the horses, horsemanship, and will also require a great deal of good judgement.

Don't worry. I have imparted those traits to several of my little riders and they will do just fine in helping me keep this program going. We will be aided in that effort by the fact that no members of the established horse world will have any input, whatsoever, in any decisions to be made regarding the program.

(Whew, the horses dodged a bullet there.)
Posted by Steve Edwards