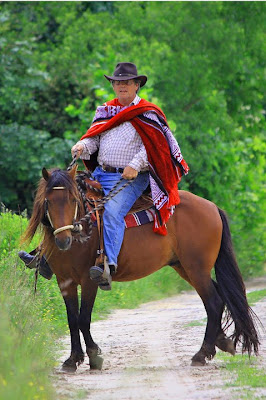 I find few things more heroic than the overcoming of disabilities. Lincoln, both Roosevelts, and Lido lived heroic lives.

Tradewind has too. He was removed from the wild at Corolla because he was absolutely crippled with founder. It took more than a year of Pete Ramey style trimming before he could walk without pain. He is 12.2 and weighs 626 pounds. He has been ridden fifty miles in a day. While my weight varied from 222-212 in just one year he carried me 206 hours in the woods, the vast majority of that being trotting and cantering. That does not include the many hours that he carried other riders in the woods during the same year.

Yesterday the was named Horse of the Americas Registry's National Pleasure Trail Horse of the Year for his accomplishments. Look back over those figures in the paragraph just above us. Those are not typos. Yes, the figures are shocking. As recently as three years ago I did not know that this was possible. Tradewind is smaller than the pony that I rode when I was three years old.

(Please refer back to the previous post which distinguishes between ignorance and arrogant stupidity. One who simply had no idea that a Colonial Spanish horse of such small size could achieve such feats is merely ignorant. One who reads of such accomplishments and scoffs that such feats are impossible or, even worse, that it is cruel to subject a pony to such loads is arrogant and stupid.)

Here is the point that Tradewind's accomplishments should drive home to every one that cares about horses--The Corollas are a genetic treasure trove. The term super horse may very well be appropriate.

We simply cannot allow these horses to become extinct. To do so would be the height of stupid arrogance.